As we know from slang’s taxonomy, that rough list of those topics of which it is so ardent an explorer, and for which in this area it racks up many thousands of synonyms – perhaps 10,000 in all – sex and its performance rank high in the counter-linguistic vocabulary. This is logical: the subject may have emerged long since from whatever closet in which a mix of religiosity, censoriousness and shame, some might suggest modesty, had confined it, but there remain lingering vestiges of taboo. The nice may have outstripped the naughty, but the latter remains. Slang, always on the margins, is thus a logical bedfellow for pornography, another side of sex that, while never so available, always was and still does go hand-in-hand with a certain reticence.

Porn was there from the early 18th century, often translated from French originals, but it doesn’t come fully on stream until the mid-19th century. It found a London home in a cluster of ancient alleyways  where the Strand becomes Fleet Street – Holywell St (there had been an actual well, holy or otherwise), Wych Street, Russell Court – that would be demolished around 1900. The impetus was property development but the sense of ridding the city of a moral plague spot was not un-noticed.  Its mere topography represented a threat: a marginal area, narrow twisting streets, ancient buildings, dubious inhabitants, immoral merchandise. It was everything that town planners, hell’s-bent on carving out a shiny new metropolis deplored. It was known as ‘The Backside of St Clements’ (an adjacent church). It had to go. 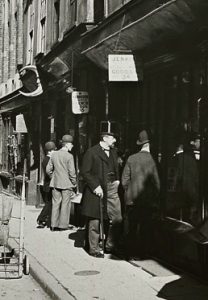 Publishing had begun early in the century. It focused on politics: radical, dangerous texts. The same men who would make the area Stroke Book Central started off their career publishing them. Foremost among them, William Dugdale, a one-man embodiment of Holywell squalor, who published radical tracts before ever he set a forme of filth. He was on the edge of the 1819 Cato Street Conspiracy, aimed to bring a cabinet dinner to an explosive conclusion, but was never caught. He moved to piracy (Byron’s Don Juan) then to softcore (the semi-sexy Memoirs of a Man of Pleasure which had appeared as the less titillatory History of the Human Heart  in 1769) and in 1832, with an edition of Cleland’s Memoirs of a Woman of Pleasure (aka Fanny Hill), went the rest of the way round the pornographic corner.  And down the hill. Thereafter it was pulp all the way. Read with but a single hand.

His tumescent catalogues included The Battles of Venus, The Bed-Fellows or the Young Misses Manuel [sic], The Confessions of a Young Lady, The Ladies’ Telltale, Scenes in the Seraglio and The Victim of Lust. There was a good deal of fladge though it was left to the far less notorious general publisher  – and slang lexicographer – John Camden Hotten to produce such titles as Lady Bumtickler’s Revels. There was a series, Lascivious Gems: among them ‘The Diary of a Nymphomaniac’, ‘The Fanciful Extremes of Fucksters’, ‘The Pleasing Pastime of Frigging’ and ‘A Night in St John’s Wood.’

He put out bawdy songbooks – The ‘Tuzzymuzzy Songster’, ‘The Wanton Warbler’ – and embryonic top-shelf monthlies such as The Boudoir and The Exquisite, He was regularly prosecuted and ran up nine sentences by 1857. His trial that year so appalled Lord Campbell –  ‘a sale of poison more deadly than prussic acid, strychnine or arsenic’ –  that My Lord drove through the first Obscene Publications Act. The idea of women frequenting Dugdale’s shops was apparently the final straw. A century later there was a new OPA and Lady Chatterley’s prosecutor would ask: ‘Is this a book you would wish your wife or servants to read?’ Like its texts, little changes in Pornland.

The stock was repeatedly seized and destroyed. No matter: there was always more, knocked out in the cobwebby back rooms of one of his half dozen shops. The books, illustrated with barely lavatorial daubs, sold at three guineas, approximately three times the price of a ‘straight’ three-volume novel and six weeks’ wages for the average worker; he became rich. It didn’t last. When he died in 1868 he was serving a sentence in the Clerkenwell House of Correction and the death certificate hints at syphilis. There are no portraits. His legacy lay in the trade.

Blurbing one of his catalogues, a list that included The Lustful Turk, Flossie, a Venus of Fifteen, The Amatory Experiences of a Surgeon and Nunnery Tales, Dugdale had promised that ‘every stretch of voluptuous imagination is here fully depicted, rogering, ramming, one unbounded scene of lust, lechery and licentiousness.’ He might have been puffing My Secret Life.

The eleven books are positioned as an ‘erotic memoir’. While it may indeed have qualified as the latter, the role of eros, like that of beauty is strictly limited to the beholder. Or perhaps the performer. ‘Walter’ obviously saw every copulation as worthy of recall (the recall itself, if true, is impressive) but the reader’s main experience is not erection but exhaustion. Act follows act, partner upon partner, place upon place. No one has counted how many couplings our hero enjoys: a couple of thousand perhaps. The text yields up 464 individual slang terms and like his bouts of sex they are regularly repeated. In its first volume alone cunt appears 331 times, prick 253, fuck 177, frig 102.

My Secret Life leans heavily on the canonical terms. Like his  contemporaries, ‘Walter’ relishes the simple obscenities and he enjoys persuading his partners to mouth them as they copulate. But even if the book is, as claimed, a genuine sexual autobiography (it lacks even the rudimentary fantasies of its unarguably fictional equivalents, being a repetitive list of essentially vanilla copulations) ‘Walter’, like every pornographer, makes some attempt to ring the linguistic changes. He has some 52 synonyms for the penis, including engine, pego, cunt-rammer, doodle, cucumber, stretcher, gristle, frigger, generating tool, persuader, pickle, spindle, spouter and truncheon. Vagina brings in 59: grummet, machine, article, sperm-sucker, pin-cushion, pleasure place, pouter, man-trap, horse-collar, tail, purse, scabbard and you-know-what. Sexual intercourse has nearly 100, among them shove, bullock, bounce, bumbaste, belly-bump, grind, poke, pump, split, strum, whop and have a game of fathers and mothers. A fan of oral intercourse, he gives the lexicographer a first use of eat for fellate, and related terms include suck and minette for fellate, plus gamahuche, which worked for either gender, and the two-way term sixty-nine.

For all that, and given such meticulous exposition, he sets himself up as a discreet seducer: there may have been, and he assures us there were, just as many tumblings of supposedly respectable bourgeoises, but we are not introduced to these partners. Revelation is reserved for servants and whores (the former reluctant then, invariably and true to more avowed pornography, enthusiastic; the latter merely enthusiastic, albeit mercenary), plus the odd teen virgin. If, as the 18th century radical John Wilkes allegedly claimed, ‘life’ is simply ‘a few good fucks and then we die’, Walter’s version, once truly secret, now lovingly written out, is determined to prove the point. 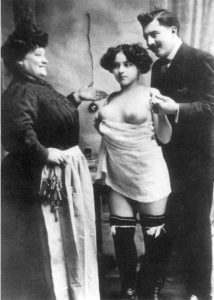 He is admirably cosmopolitan – Europe provides as a happy a hunting ground as does the UK – and despite being a Victorian (with all the clichés that we have learned to attribute to that confused and often paradoxical century) remarkably libertarian. He’s no feminist – we can’t have everything – but for all that he treats servants as one might expect, he assumes no special superiority for the crested above the cloven. With what not merely the Victorians, but their 21st century descendants might condemn as sexually ‘abnormal’, ‘Walter’ has no problems. If he calls any practice ‘aberrant’, e.g. his occasionally consummated desire for homosexual fellatio (given and gotten both) or his intermittent obsessions with either brand of ‘scat’, then it is never the acts, but simply his own reluctance to perform them that is found wanting.

It may betray a degree of personal fetishism, a lexicographer’s fantasies perhaps, but deliberately or otherwise, the Index is quite as fascinating as the text to which it refers. It may be discursive at times, and sometimes mis-paginated, but it is surely unique. Some entries are self-explanatory; checking the text almost takes away the fun. ‘Virginities, women want to piddle after defloration’; ‘Sodomites, put pestles up arseholes’; ‘Thrusts of prick, number given when fucking’ (average 45 thrusts/min. apparently); ‘Fucking, with another man present and sucking man’s prick whilst’; ‘Farting, one left in a closet by self’; ‘Cunts, felt in church by me and frigged’; ‘Anus, toothbrush up a man’s while he’s gamahuched’. Others, however, have a mystery all of their own and the mind struggles, after 2,300 pages of in, out and equally often round-and-about, to recall the specifics of ‘Apprentice dress-makers, three in a cab’; ‘Barn-loft, page frigging himself in’; ‘Champagne and sperm, singular letch’; ‘Bloody nose and broken pisspot’; ‘Kid gloves and cold cream frigging’; ‘Postage stamp, a woman got by gift of’ and ‘Double-cunted harlot’. The Index also introduces us to another side of our author, the philosopher: ‘Prick, is an emblem of the Deity’; ‘Fucking, is obedience to the Divine command “increase and multiply”’ (that said, Walter procures as many abortions as he fathers bastards); ‘Gamahuching, man is superior to the beasts therein’; and ‘Cunts, are divine and not obscene organs.’ Even De Sade, philosophizing in his boudoir, would surely have been impressed.

In a way the forty odd folio columns that make up the Index are the biggest tease of all. Promising so much and ultimately delivering all too little. For all the charm of their entries, once accessed the relevant anecdote lends itself too regularly to the same old thing. But then as Walter himself affirms, intercourse itself is repetition, it is the preliminaries and the posture that differentiate one rogering from another. Elaborate if innately empty form has to offer up a garnish to predictable content.

There were but six printed copies of the great tome and but three, apparently, survive. The price was £100 (nearly £9,000 today), daunting even to the wealthier fan. Grove Press printed a facsimile in 1966 and an on line version is available from www.gutenberg.org (and many other sites).