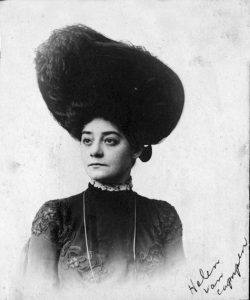 Helen Tabor. Helen Green. Helen van Campen. Helen Cotter. Helen Hill. One childhood turning teenage, four husbands (two divorced, two died on her), one busy widowhood. Van Campen seems to have been the name that lasted, though early fans first met her as Green. Born in 1880 to Louisiana bluebloods with the obligatory plantation. Memoirs say ‘petite, athletic, fearless.’ Pre-teen travels on a Gilded Age Grand Tour: Europe, the Middle East (Luxor) and Russia (St Petersburg). In 1893 the family money runs out: another victim of that year’s ‘Great Panic’ on the stock market and the depression that follows. Ms Tabor is unfazed; turns to bloodstock and in the next few years breeds and races steeplechasers; more travels, this time for racing, across the States, down to Brazil and back to Europe. In 1897 another trip: the Klondike Gold Rush in Alaska. Based in Nome, a shorefront tent city that stretched 30 miles, and which claimed itself to be the world’s largest gold-pan. The lucky, even the barely competent could pick the precious metal off the sand. She visits three times, though she doesn’t seem to have left Alaska rich.

In 1905 she’s in New York. New town, new career. Journalism and short stories focused on working girls (hotel switch-boards and department store counters), on vaudeville and its lowlife professionals. At some stage, maybe 1905, she marries Burt Green, a vaudeville pianist, who some say clues her into the world he knows and these early pieces appear under his surname. First published in the N.Y. Telegraph the vaudeville stories appear in a couple of collections: At the Actors’ Boarding House (1906) and The Maison de Shine (1908). Ethel Barrymore, of the theatrical family, predicts imminent fame. In 1909 a third volume, no bananas, top or other, this time but featuring Mr Jackson, Green’s version of the well-heeled rogue-with-a-heart-of-gold.  New York palls, or maybe it’s the marriage. In 1910 they divorce, he to a career that will partner him up with such as Oscar Hammerstein II, she’s back in Alaska. Now with husband number two: Frank Rumsey Van Campen, chief mining engineer for the Alaska Syndicate’s Beatson Copper Mine, currently biggest in the state. Still, the New York gossip hacks claimed him as one of their own: a writer; they also wrote up the literary couple as purchasers of a gold mine and sympathised with the new bride, sweeping snow off the front porch and pining for ‘the reeking hop houses’ of Chinatown and the ‘gilded cafes’ of Times Square. No such thing: she loved it. In 1915 P.G. Wodehouse, writing in Vanity Fair on ‘The habit of picking on New York’ noted that ‘Mrs. Helen van Campen (Helen Green, of blessed gifts and memories) is the latest writer to commit mayhem on our unoffending city.’ Her theory, he claims , being that ‘the population of New York are a set of effete worms,’ while in Alaska, which she prefers ‘and does not care who knows it, every man is a Galahad and every woman is like the heroine of a three-volume novel.’

The couple live on LaTouche Island in Prince William Sound. Mrs Van Campen rides and writes (working in a small cabin which the miners build for her out in the bay), still looking at local topics, which now means stories with an Alaskan theme. But not always. In 1913 she wrote ‘Life on Broadway’, nine sketches for McLure’s, a popular slick, eight featuring what the critic Susan Harris Smith has termed  ‘social-climbing, gold-digging, fast-talking slang-slinging hustlers’: Flossie, the operator, Elmer the front lobby coat-boy and Evangeline, their showgirl pal. Their speech is  a mixture of current slang, everyday working-class New York speech and a heavy larding of mis-applied pretension. Nearer home there was ‘Corsets in Alaska’ and ‘What Miners Read’, a puff job for a literary mag. She would always write: in 1946, her contribution ‘I’ll See You in Alaska’, in that year’s state Guide took the form of a ‘Dear Helen’ Q & A.

QUERY: ‘I’m crazy to go to Alaska Just divorced (he was n.g. {no good}) and considered glamorous (won a beauty contest) and where are all those MEN?’

In 1918 he quits the mine and in 1919 she quits him. Husband number three arrives in 1920: George Cotter, a contractor and big game hunter and the two of them move across the bay to Seward. Her writing prospers as do her adventures. To quote her entry in the Alaska Mining Hall of Fame, ‘She traveled throughout the Alaska Territory by boat, railroad and dogsled and on horseback. She looked at reindeer herds near Teller, visited with hard rock miners at Nebesna Gold Mine, hunted moose on the Kenai Peninsula, and visited placer miners in the Chisana district. For nearly two years, Helen operated a small placer gold mine on Cooper Creek, near Seward on the Kenai Peninsula.’ She took photos, mainly of indigenous peoples, and would click away for the rest of her life.

Ever mobile, the couple moved to Argentina (George had a contracting gig) in 1921, then back to Texas (another job: oil) in 1924. He died that year, out on the road. From around 1915 she’d been writing Hollywood scripts and commuted between there and Alaska – Seward and later Fairbanks, where she moved in 1939. During the war she worked as director of personnel services at the U.S. Army Air Force Base at Ladd Field in Fairbanks. At some stage there was a fourth marriage: to Edwin C. Hill, a CBS radio star who put out soft features: ‘The Human Side of the News’.

She died in April 1960. She remains a major figure in Canada, memorialized in a  scholarship aimed to help young journalists. 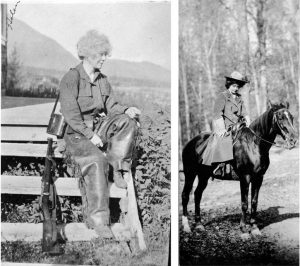 The works of Helen Green van Campen offers 600 slang terms of which she could claim to have put 165 in print for the first time. Among them she brings us shroud and boiler, a  dress suit, including its ‘boiled’ shirt (a better-known equivalent was the Wodehousian soup and fish), dead bird, a hopeless case or situation, off one’s dip, crazy, brace game, a crooked gambling game and thus any form of fraud, and to put on the fritz, to spoil, to render out of order, to put a stop to, which term probably originates in the spluttering of a faulty wire or connection, though it may have been popularized by Fritz, a German, and the hostility to such generated by World War I propaganda. Then there is get hunk with, to get even with, which used standard American hunk (originally from Dutch hunk, meaning ‘home’ in a children’s game), in a safe or good position or condition and which may thus be linked to hunky-dory. Van Campen also pioneered fix someone’s clock, to take revenge upon, to get even with or to foil an antagonist’s plans (modernity prefers that the clock should be cleaned). Her use of Joe Hep, which extends the slightly older hep (which she also launched into print), suggests the possibilities of the lexicographer David Maurer’s supposed (and generally rejected) etymology for hep: that Joe was real, ran a Chicago bar (perhaps, we might fantasize, even adjacent to that tended by slang’s other mythological booze-hoister Mickey Finn) and dispensed ‘the real thing’ when it came to inside dope. Perhaps, but the best guess for hep is a variation on hip, and hip most likely came from opium’s lie on the hip, the position the smoker took and suggests an early identification of drugs and cool.

Other terms, already known, were tough sledding, I’m from Missouri (you’ll have to show me), moll buzzer, on the water wagon, give someone the eye, also-ran, monkey business, , souse, shoot the con, put the bee on, watch my smoke, a roll that would choke a mule, four-flushing, johnny-at-the-rat-hole, twenty-three skidoo and much besides. Nothing exceptional, nothing criminal: this was mainstream slang, the currency of the world in which she moved.

No-one would suggest that Mrs Green was the first to use slang. And certainly not that of New Yorkers who being urban and metropolitan were the pioneers of the form in the USA. But she is undoubtedly one of the best of a rash of late 19th century/early 2oth century purveyors of non-criminal slang, all of whose stories, often at least partially humorous, started their life in the contemporary tabloid press.  What singles her out from such as George Ade, a mid-Westerner whose Fables in Slang (and much beside) would make millions from the register, was that her slang words appear as wholly natural. There’s no sense of forcing, of slang for slang’s sake. A typical Ade fable is bespattered with almost Germanic capitalisation, and each capital signposts another example of the counter-language. Green’s slang is wholly contextual: it flows as and where required. Whether, as some suggest, husband Burt passed on what he knew, is unproven: Helen seems quite capable of hunting it down alone. As regards the stories, who cares. Its appearances are matter-of-fact, one might hear it in one’s daily life.

One scene she does pioneer: that of drugs. Or at least she is the first to treat the subject in a way that quite rejected the predictable and seemingly irresistible sensationalism of its contemporary coverage. Again, she wasn’t the first to note the city’s drug consumption: first opium, and after and alongside that such injectable and sniffable narcotics as morphine and then heroin (cocaine seemed to have side-stepped her vaudevillians, though those trudging round the country doing two shows a day in the small time could probably have used some). The usual scenario, however, was very much of the ‘shock! horror!…I made my excuses and left’ style. Coverage offered a mixture of a mis-transcribed and mis-labelled taxonomy of the outfit required for opium smoking, the inevitable, reprehensible admixture of white girls and yellow men, and the horrors, much deserved, of withdrawal. But no more.

Green offers a dozen terms, perhaps not many, but as many as any peer would have known. And she offers them straight. ‘One night I’m a layin’ on the hip, smokin’ up a few’ says a boarder at the Maison de Shine. That’s her take: no more, no less, it’s what you do. Other examples of drug slang include dope and smoke (both opium; large-scale cannabis use had yet to materialise in New York), morph, morphine and white stuff, morphine again, or the recently synthesised and more powerful heroin, and bunk (as in bunkum), weak or counterfeit drugs; a shell, a measure of opium; hit the stem, to smoke opium, fix up or take a shot, to inject oneself, effected by the gun or hypodermic syringe; yen, the desire for narcotics, against, addicted, gag and habit, both meaning regular use, and winging, withdrawing (a seeming precursor but definite antonym of the widely used and positive flying); and the hop joint, opium’s equivalent of a shooting gallery.

In terms of her writing and like the vaudeville she once hymned, Green, with or without the Van Campen is largely invisible today. Her screenwriting, for instance, has yet to surface in IMDb. She has a presence in Canada but it is for her achievements beyond New York’s demi-monde. Slang, as ever is not a good career move and she is hardly unique. With the exception of Damon Runyon, he who parlayed sports reporting onto Broadway and thence to his ‘Guys and Dolls’ most of Green’s early contemporaries have faded. Even Ade, for whom a town in Indiana, a football stadium (at Purdue University) and a World War II Liberty ship were all named. The great slang-wielding gossip writers – O.O. McIntyre and later Walter Winchell – might never have been. If Helen Green has joined their lost Valhalla, so be it. Slang will not forget. 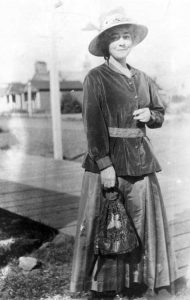