Article, Heroes of Slang
by Jonathon Green
5 May 2017

Of the many canards that assail the object of the slang lexicographer’s toil and linguistic affections is that of verbal inadequacy, the mockery by the loquaciously well-endowed of the size of one’s lexis. To use slang, they sneer, is to demonstrate communicative inadequacy. You and whose dictionary, ripostes the wounded drudge, brandishing 133,000 slang variations. The counter-language is in fact vastly inventive, creative some might suggest, given its admitted focus on certain themes, to the point of satiety.

It is true that this may not have been apparent in slang’s earliest days, when faint hearts omitted it from the printed page and what was recorded focused strictly on the jargon of the world of crime, but earliest days pass, and comes the hour comes the man or woman. Slang, as this expanding list of heroes and heroines is intended to demonstrate, has many such. Thus, as the latest example of slang’s brightest stars, I offer the word-obsessed courtier and author Sir Thomas Urquhart of Cromarty (1611-60).

A Scottish aristocrat and unabashed cavalier, he was knighted by Charles I, and inherited his father’s estates, but also his debts. He attempted to deal with them by writing. In the way of his century, Urquhart’s works boasted splendid titles. Among them were the Pantochronochanon, or, A Peculiar Promptuary of Time, which explained his family genealogy,  the Ekskubalauron, or, The Discovery of a most Exquisite Jewel, which pushed Urquhart’s hatred of presbyterianism – the family were always episcopalians – and simultaneously touted a wide range of Scottish heroes, not all of whom may in fact have existed. A third important work was the Logopandecteision, or, An Introduction to the Universal Language. This promoted the universal language that had been invented, if never popularized, by the linguistic scholar Francis Lodwick.

This last title had barely appeared when this ‘logofascinated spirit’ as he described himself, took upon himself the publication of ‘The Works of Master Francois Rabelais doctor in physick … now faithfully translated into English.’ Rabelais (c. 1494-1553) was French and had written in a contemporary version of that language the work known as Gargantua and Pantagruel, the first books of which appeared in 1534 authored by one ‘Alcofribas Nasier’ – an anagram of the author’s name. Books one and two of Urquhart’s translation appeared in 1653, book three in 1693; the last two books, edited and translated by Peter Motteux, came in 1694 and 1708. Sir Thomas remains the canonical interpreter of an ‘Englished’ Rabelais.

The literary merits of his work (among other things one of the more censored productions of the last half millennium) are irrelevant here. What matters is the language he used, or more properly the language into which Urquhart, a devotee of  ‘metonymical, ironical, metaphysical and synecdochical instruments of elocution’ – or ‘meaningful words’, as the less circumlocutious might put it – rendered it in his translation.

A good example is one of Urquhart’s (and Rabelais’) lists, all items of which refer to what the translator initially terms the ‘you know what’, a piece of careless vaguery applicable to many aspects of sex, and in this case the giant Gargantua’s penis. When Urquhart wrote, aside from its medico-Latin self, the primary synonym for penis was yard. Its roots lie in number of terms, typically the Old Teutonic gazdjo, all of which mean a thin pole and which as such may possibly be linked to the Latin hasta, a spear, and even to the Italian cazzo, also slang for penis. (Certainly 17th century slang’s gadso and catso borrow from the Italian original and like a number of similar terms mean both penis and rogue or villain.) The first dictionary use comes in John Florio’s New World of Words of 1598: ‘Priapismo, […] pertaining to a mans priuities, or the standing of a mans yard), but it can be found much earlier, e.g. in Wyclif’s 1682 translation of the Bible (where, in Genesis, it is found in the story of the first circumcision). Though Urquhart does not disdain yard, he had Rabelais’ vast linguistic inventiveness to deal with. He proved an able pupil. 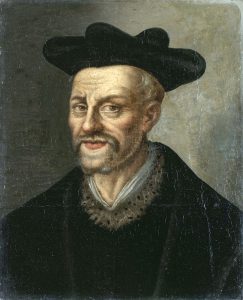 The list derives from a scene in which that same penis, an object of both wonder and delight, is being dandled by an enthusiastic gaggle of court ladies. So gross a member doubtless merited so extensive a list: ‘One of them would call it her pillicock, her fiddle-diddle, her staff of love, her tickle-gizzard, her gentle-titler. Another, her sugar-plum, her kingo, her old rowley. her touch-trap, her flap dowdle. Another again, her brand of coral, her placket-racket, her Cyprian sceptre, her tit-bit, her bob-lady. And some of the other women would give these names, my Roger, my cockatoo, my nimble-wimble, bush-beater, claw-buttock, evesdropper, pick-lock, pioneer, bully-ruffin, smell-smock, trouble-gusset, my lusty live sausage, my crimson chitterlin, rump-splitter, shove-devil, down right to it, stiff and stout, in and to, at her again, my coney-borrow-ferret. wily-beguiley, my pretty rogue.’

Looking at his choice of images, one sees many that would recur in slang’s treatment of the penis: the colour of pink flesh (brand of coral, crimson chitterlin), the idea of consumption whether by vagina or mouth (the crimson chitterlin again, the sugar-plum, live sausage or tit-bit), the idea of the penis as attacking the woman (fiddle-diddle – the fiddle, aside from suggesting interference, is also something upon which the lover ‘plays’), tickle-gizzard, touch-trap, bush-beater, claw-buttock, rump-splitter ) or simply rummaging in her garments  (placket-racket, smell-smock, trouble-gusset – racket, smock and gusset all doubling as garments and genitals in a variety of slang terms); it can come from hell (old rowley, shove-devil, bully-ruffin; whether the sailors who nicknamed the 19th century warship HMS Bellepheron the ‘Bully-Ruffian’ were aware of this is unknown); it can show its shape (Cyprian sceptre, staff of love, stiff and stout), it can be cunning (picklock, pioneer, coney-borrow-ferret, wily-beguiley, my pretty rogue) and simply metonymize the rampant male (down right to it, in and to, at her again). And of course none, none at all actually use the word in question. 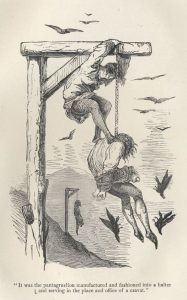 The Translation: a 19th century edition with illustrations by Doré

It is a wonderful list – and Rabelais/Urquhart produce many similar, and often in the context of the pleasures of sex or food. As noted, a couple of culinary images feature in the penis-list. What Urquhart termed a live sausage, was, and remains in French, an andouille, and he took what Rabelais termed a couille bredouille (literally ‘an empty-handed testicle’), and translated it as a chitterling, properly an animal intestine, another meaty delight and a staple of soul food. Sausages also take centre stage in Book Four of the epic, where over eight chapters the author presents the fantastical history of the satirical War of the Andouilles, in which the army of tripe-stuffed sausages, worshippers of a flying pig, and its allies the ‘savage Blood Sausages and the Mountain Sausages’, combined its literal, gustatory meaning with its penile one, and offered the mix as an attack on Protestantism.

Urquhart’s translation was both literal – some of its words already existed – and inventive, a far larger number were his coinages; it was a skill that he had already demonstrated in his Trissotetras, or, A most exquisite table for resolving all manner of triangles (1645) in which of the 200 words he used to ‘simplify’ Pythagoras’ theorem (which had required only 23), the bulk were of his own making.

On the level of pure imagery Urquhart’s coinages are not especially exceptional. But in many cases they represent themes that would embed themselves (and in some cases were already embedded) in slang. Meanwhile the subject of his list – the male member, no more, no less, and synonymized to such variegated degrees – was certainly still unique. No slang dictionary – or more properly glossary, since no dictionary of slang proper would appear for another 45 years – had yet approached sex so freely. The 16th century whores and villains whose careers had been itemised in the canting lists obviously had sex, but as regards the bits and bobs, the human giblets required to get the job done, then the canting crew, at least in print, were often as puritan as the establishment they defied. There was jockum for penis and wap for have sex, but little else. That Urquhart was one of that establishment, a member of the Scottish landed gentry and intimate of King Charles I, merely underlines an irony. That Rabelais, the fount of Urquhart’s creativity, was French went without saying: the belief that one had to cross the Channel if one wanted to get that ‘dirty’ stuff uncensored was a truism (if not a truth) that appealed to 17th century Britons as effectively as its always has to their successors.