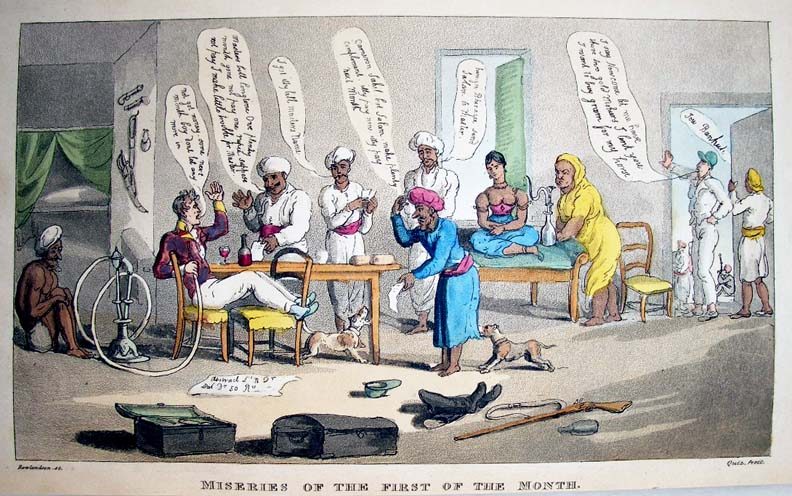 British India is a somewhat loose term used to describe India under colonial rule, which began in a minor way at certain key trading ports such a Surat, Calicut, Bombay, Calcutta, etc., from the 17th century onwards under the control of the British East India Company, later to become known colloquially as John Company. Its size and territory waxed and waned over the years, and at its greatest extent British India included present-day Afghanistan, Pakistan, Nepal, Bangladesh, and even Burma.

For the bulk of the colonial era British India was divided into three ‘presidencies’: The Madras Presidency in the south, the Bombay Presidency in the north west, and the Bengal Presidency in the north east, of which the capital was Calcutta. There was some degree of rivalry amongst these presidencies and this is reflected in the derogatory terms for residents of each of them. Those of the Bengal Presidency were known as Qui-hi’s, based on the common call “Qui hi?” (“Is anyone there?”) used to summon a servant to do one’s bidding, a wry comment on the arch-colonial attitude towards the local servile class. Another disparaging term for inhabitants of the Bengal Presidency was Ditcher, referring to a then well-known epic military fail in the form of a three-mile defensive ditch dug around the outskirts of Calcutta in 1742. It was originally meant to supply protection from a local band of marauders called the Bargis, who never actually attacked the city, and then later proved to be spectacularly useless when the city was attacked in 1756 by an entirely different group. The ‘ditch’ later became a dumping ground for refuse and garbage and by 1893 had been completely filled in.

Residents of the Bombay Presidency were known as Ducks, or, in full, Bombay Ducks, referring to a type of dried fish commonly eaten there (a name which in turn must have been jocular in origin, mixing up avian and aquatic lifeforms as it does). Last in the presidency pecking order seems to have been Madras, the residents of which were called Mulls, a shortening of Mulligatawny, the famous spicy soup of India’s south. No doubt, the term Mull conjures up the negative vibes associated with the verb to mull, to make a mess of. Worse still, Madras was also known as the Benighted Presidency, and collectively the residents there were simply the Benighted, from the point of view of the Ducks and the Qui-his at any rate.

The prevailing Indian languages of the presidencies were Tamil (Madras), Hindustani (Bombay), and Bengali (Bengal), though a host of other languages prevailed in different regions and sub-regions. In the north, however, Hindustani was especially prevalent and was used as a lingua franca to a certain extent. During this era, before Independence and Partition in the mid-twentieth century, it is more correct to speak of Hindustani as the language had not yet split into the Hindi (used in India and heavily augmented by Sanskrit) and Urdu (used in Pakistan and heavily augmented by Arabic) so familiar in the subcontinent today.While many of the colonials became fluent speakers of local languages, a great deal more learned only a smattering or nothing of them.

Short of a posting or a visit to India, or the reading of the many books that sprang from the colonial experience, the short cut to the language that emerged from the British presence in the subcontinent was a single-volume dictionary that appeared in 1886. Written by Sir Henry Yule and A.C. Burnell (effectively by Yule since Burnell died before the work was finished), its formal description was ‘a glossary of colloquial Anglo-Indian words and phrases, and of kindred terms, etymological, historical, geographical and discursive’ but it was actually entitled with the somewhat mysterious name of ‘Hobson-Jobson.’ This, it transpired, was the British mangling of the cry of  ‘Hassan, Hussein,’ uttered by Shiite Muslims, marching and ritualistically beating their chests during the procession that accompanies the festival of the Muharram. Yule had chosen it quite consciously: however learned, a book never suffered from bearing an interesting name.

Hobson-Jobson’s thousand pages offer around 2,400 terms. They include place names and religious terminology, flora, fauna, occupational and administrative titles and much more. Of these some 100 qualify as slang. This new GDoS update has taken a look at that sub-group and based on that research has added approximately 1,000 new citations to the database. In many cases these predate the material that Yule was able to offer his readers.

One set of fascinating words are a series of verbs that arose in Anglo-Indian English based on verbs in Hindustani. The interesting point about these verbs is the reassignment of the mood of the verbs, for in English the verbs are used as simple indicative verbs but the original Hindustani verbs are in the imperative mood. This gives a powerful insight into the prevalent social standing of the coloniser and the colonised. The imperative form of a verb in Hindustani is made by adding the suffix -o to the root, so that if khanā means ‘to eat’, then kha-o is a more direct order meaning ‘Eat!’ Clearly the European bosses were so used to ordering their Indian servants around that the most salient form of the verbs, often presumably the only form of the verb known, was the imperative. Yule and Burnell recorded seven of these verbs: bunnow (to fabricate or falsify), dumcow (to intimidate or subdue), foozilow (to flatter), gubbrow (to confuse or bewilder), luggow (to moor a boat), puckerow (to seize or grab), and sumjao (to coerce or persuade). Some other imperative verbs became common parlance amongst Anglo-Indians but remained as imperatives, such as chullo! (go!), dekko! (look!), and the curious hitherao! (come here!), based on Hindustani but incorporating the English preposition hither. Meanwhile the Hindustani imperative ṭoko! from the verb ṭoknā, to blame or censure, came to be used as an English slang noun toco or toko meaning ‘punishment’.

Of all the Indian terms that seem to have captured the imagination of the British, none seems to have been more thoroughly adopted than the swear word banchoot, essentially the Hindustani equivalent of our modern-day motherfucker, but literally meaning ‘sister fucker’. Same idea, different family member. Yule and Burnell went so far as recording this word in their monumental dictionary, but balked at supplying the etymology or literal meaning. Instead they note that they would not have even recorded the word if the ‘odious meaning were not obscure to the general’ and go on to remark that ‘if it were known to the Englishmen who sometimes use the words, we believe there are few who would not shrink from such brutality’. Actually, in all likelihood the opposite is most probably the case: that is, the term was so readily adopted precisely because those very Englishmen knew exactly what it meant. Indeed, the insult in its Anglicised spelling banchoot (somewhat remote from its proper form bahinchod) is recorded in English as early as 1796, and the plethora of citations our research has uncovered, despite the very taboo nature of the term and the proscription against printing obscenities, is testimony to its continual popularity in English over many centuries. Of course, part of the joy of using the term resides in the fact that only those ‘in the know’ understand the true meaning.

While it could be argued that with terms such as banchoot, beteechoot and teddimachoot, the colonial era unblushingly hosted some of the least bridled language 19th century writing might produce (including actual pornography), such terms were of course masked from nearly all readers by the language from which they came.  But the era’s slang could also offer words that still give us a glimpse of the sexual side of British life. Hobson-Jobson ignores the fishing fleet, an all-English term, but those successive teams of as yet unmarried female hopefuls, sailing to India to catch a husband, were a regular feature of life. Individual members were known as spins, as in spinster and even if that status rarely lasted (those who failed and went back ‘home’ were known as ‘Returned Empties’ ) they were most welcome, whether among the jaded veterans of the cities, or the lonely men of distant out-stations.

In its original Hindi the word jawaub means ‘dismissal’; as adopted by the resident British,  it was tweaked and rendered more specific: the dismissal by a woman of a proposal of marriage. A spin, however desperate, was not (dis)honour-bound to say yes. That so many men found themselves turned down, led to the notional Jawaub Club, an insubstantial but all-too-real establishment whose less than cheery members had at some stage been turned down by an object of desire. Given the circumstances – four men to every girl – they were usually multiple offenders.

Were the spin to say yes, and the Juwaub Club deprived of a new member, tradition demanded that for a week or ten days prior to the actual marriage, the bride-to-be would be gigged. In other words she was taken around town in a gig, a small coach, and displayed to local society. A synonym was carted (the actual cart might be resisted) although that term had form: Shakespeare mentions it in The Taming of the Shrew, it meant to expose a whore in a cart, driving her through the streets for public humiliation and was still practiced in the late 18th century.

Finally, the grass widow, and her male equivalent, the grass widower. She, for it was mainly she, was a woman living away from her husband; specifically one residing for the summer in a hill station, or living in Britain while her husband is stationed in India. As the vulgar put it, she had been ‘put out to grass’. As to how she behaved? If, to pursue the ‘horse’ imagery, she found new ways to ride, that was up to her (and the gup, or gossip, was keen to report). Certainly there were sufficient fun and games for slang to name her consort, the bow-wow, a young lover who ‘yelped’ puppy-like in her trail. 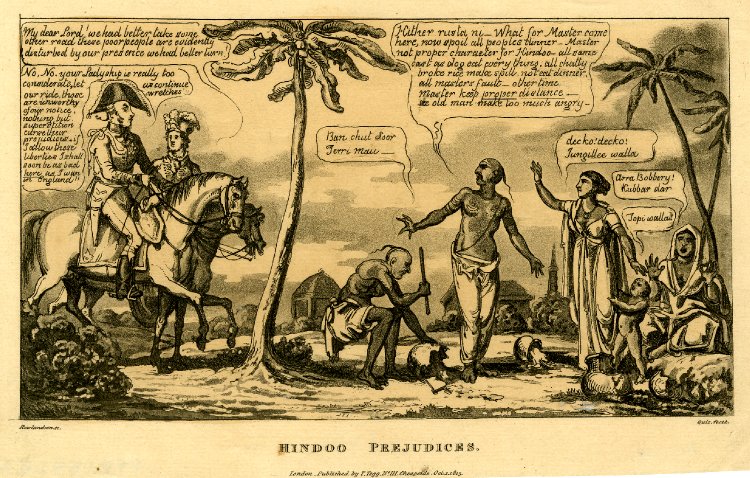