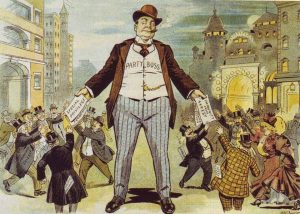 Nearly there. Two weeks left at time of writing and nowhere to go but down. Will that put an end to maunderings from across the pond? Probably not. Anyway, we Brits have plenty of local euro stuff to ponder over the ditch. We shall see.

Before slang there was quotations, Dictionaries of. Among them Last Words, the Royals, Sport, Cynics and Politics. Plenty of opinion there, plenty of bons mots and wit, but the problem with quotes is that ultimately they’re no more than a single opinion, however amusing. Not that far removed, too often not at all removed from the little texts we’ll be seeing in our Christmas crackers. Slang is something else, even if the citations that help define the headwords are rarely quotable. H.L. Mencken may have seen democracy as ‘the theory that the common people know what they want, and deserve to get it good and hard’ and we may laugh along with the old curmudgeon, but slang’s examples don’t work that way. What they do, so much more important, is paint the wider scene: the way that ‘we,’ in this case anglophone slang speakers, view a given topic. That said, slang doesn’t really do politics. Nor politicians. Not, at any rate, on the same level as those old favourites: sex, drugs and, at least figuratively, rock ’n’ roll. I won’t be offering any timelines soon. If we ask slang for its response, it’s simple: we are not impressed.

Yet slang’s also omni-lexical, and pollies and profeshs ought to get a look-in. So they do, and as ever, slang goes low. Our democratic representatives must feel they get a bad rap but the people, quite literally, have spoken. The waterfront is covered:

Their campaigning, ripe with self-promoting insincerity: baby-kisser, back-slapper, flesh-presser, flapdoodler. Their cheerful bowing to the currently prevailing wind: highbinder, mugwump, tyrekicker. Though some in fairness, are adamant: the christ-killer, a noisy orator (who may not necessarily be a Jew); the flatfoot, (who may not necessarily be a policeman). Here too, we find the whole-hog man. Less dependable, though more predictable, are the crawfish, the doughface and the flopper. To jump Jim Crow, a name better known as the personification of racist laws, goes back to its lyrical roots with its political use: ‘Turn about and wheel about, / And do just so– / Turn about and wheel about, / And jump, Jim Crow,’ it’s another term for a turncoat.

Politicians speechify or jawbone. There is the spout, who can also be a preacher, and the second-rate speaker who offers a mixed-ale oration, and he can also be a mixed-aler or a mixed-ale philosopher, a drunken know-it-all. There’s place from where they hold forth: the rubber-chicken, chicken-patty or mashed potato circuit; Bullshit Castle, Nob’s Houses. If there is a Mother of Parliaments then she’s strictly single and doing what she must, as they say, to make ends meet. Here they are in the boiler-room, a sort of criminal call centre, originally used for the promotion of fake stocks and shares, transmogrified into a political HQ, cold-calling the punters to the polls. The boiler room, with its telephony, leads us to the wire, and thence the wire-puller or wire worker, with his reform and manipulations, his working of the wires and his status: wired in. Even the reformers come out nasty: narrowback, with its suggestion of narrow minds and mean, self-serving personalities. The wowser, as we know, rejoices not in the end of sin, but only in the pain doled out to the sinner. Goo-goo, from ‘good government’ or perhaps from ‘goodie-goodie,’ has also meant one who seeks political change. Will slang admit to any honesty? Only Australia’s clear– or cleanskin, which refers to cattle that have yet to receive their owner’s brand. That’s not to forget Mr Clean and rest of his happy family, Mrs Clean and Miss Clean (Master Clean is perhaps more indulgently employed) but their self-promotion as beings quite free of corruption may not be all it seems. Mr Speaker, meanwhile, has no political role, but puns on ‘speak’ as in make a noise and means a handgun. Then a couple of polysyllabic hangers-on: the UK’s quockerwodger and the US’s snollygoster. They do, if nothing else, as they’re told.

The go-to word is corruption, that or bribery. Smoothing a situation with the oil of angels, as the the 16th century had it; a transaction in which, greasy of flesh, Mr Palmer is concerned. Modernity’s pork and its barrel. Righting or straightening up. It is true much of such terminology tends to look west across the Atlantic, but we do things differently here — in form if not in content — and the necessary UK lexis would more likely be found in Morris Marples’ venerable collection of Public School Slang or the Rules and Procedures of some far-Left groupuscule. ‘Vote Early, Vote Often’ runs the core injunction, and while the ethos seems to hark back to the 18th century hustings, all coach-born toffs and drunken, biddable peasantry, as a slogan its origins lie in gangland Chicago, though whether from Al Capone or his magnificently venal pal Mayor William Hale Thompson. For all Capone’s peccadilloes, one opts for ‘Big Bill’, a man who once debated a pair of live rats so as to impress the citizenry with his promises of reform, but whose actual career, to quote the Chicago Tribune, ‘meant filth, corruption, obscenity, idiocy and bankruptcy’ and who has given his city ‘an international reputation for moronic buffoonery, barbaric crime, triumphant hoodlumism, unchecked graft, and a dejected citizenship.’

The name of the game is of course money. The politician promises to take care of his constituents, he is more likely to expect them to take care of him. What he obtains is the take and he is a take-artist. Slang has hundreds of terms, but these focus in on the backroom, sleight-of-hand, direct transfer that is graft (and confusingly, grift). No IBANs or BICs required. The money itself is boodle, carried in a boodle-bag. Just to confuse matters boodle, definitely real in the guarded payoffs of the smoke-filled room, can also stand for counterfeit cash. Disinformation underpins white money, originally used of silver in British cant, here suggesting the antithesis of highly visible green: white is effectively invisible. The real thing can be treacle, also meaning inferior port and over-sentimental love-making; all pun on that which is sweetened, in this case a deal. Sweeter yet is the plum, originally a fortune of £100,000 and more recently a lucrative political office, especially when it has been obtained corruptly. Those who shake the plum-tree do not go unrewarded.

Not a pretty picture, but through slang’s pitiless eyes, that’s politics right across the board. Not for nothing do so many of slang’s terms for ‘politician’ works as synonyms for ‘con-man,’ ‘swindler’ or ‘thief’: brass man (brass, just as in military circles, means a senior pol), boodler, fixer, grafter, grifter. The heeler, often as ward-heeler and in short a politician’s gofer and local activist, began life as a villain’s boneheaded sidekick and moved from there to sneak thieving. Other gofers include the hack, like the hackney carriage and the hack writer, he is ‘for sale’, Australia’s lollie boy, originally ‘one who sells refreshments from a tray at a cinema, sports ground’ and the student, who is presumably ‘learning the trade’.

It can get nastier. British MPs have been known as mud-pushers, which may suggest handling problems (and also means a street-sweeper), but more likely links to ‘mud’s’ definition as excrement and thence to bullshit, nonsense. More direct was shicer, taken frill-less from German’s Scheisse, shit, though shyster, itself possibly linked to scheisse, may well have helped popularize it. Shicer came on stream in Australia, and for politicians seems to have stayed there. The equation of shit-stirrer with ‘political activist’ will be judged by one’s own allegiances.

Still German, we have schmeer, which in domestic circles means a daub — of butter, cream cheese, chicken fat — but in politics means influence and returns us to palms and other bodily parts that must be greased. Other terms include clout (another Chicago coinage) and muscle, both suggesting thuggery. Those who hold clout — perhaps the image is clouting a baseball, perhaps ‘packing a punch’ in government but possibly, perhaps probably from slang’s own clout: to steal — include Mr Ten Per Cent, usually an agent but in this case battening on ‘favours’, either in their negotiation or their subsequent rake-off, a chinaman (that ‘wily Oriental’ with his devious ways) and, oldest of all, the bigwig, based on a wholly literal image. In his novel The Duke’s Children (1880) Trollope noted the importance of the ancient hairpiece as a signifier of power: ‘We must carry ourselves with some increased external dignity. The world is bigwigging itself, and we must buy a bigger wig than any we have got, in order to confront the world with proper self-respect.’ Other power-wielders include the rhyming joe goss, the heavy hitter and the kingfish, best-known as the self-created nickname of the populist Governor and Senator Huey P. Long (1893–1935) of Louisiana.

Money talks but a bit of thuggery is even more efficacious. The boys, available to describe a variety of in-groups, serve the master’s bidding. Best-known, perhaps, were New York’s mid-19th century Bowery B’hoys (see The Gangs of New York and use one’s best cod-Oirish accent) under the their fearsome, some say superhuman leader the fireman Mose, his pal Sykesy and best girl Lize. Usually associated with Chinatown, the hatchet man was recruited, at least in language, to cause trouble for one’s opponents. To throw the hatchet, however, was less violent, it merely described lying and exaggeration. To run a buck was to register an invalid vote, to rat fuck to sabotage an opponent’s campaign, and a rort, any form of trickery. All’s fair… or so it seems. One could drop the bucket, indulge in duck-shoving or peanut politics and row someone up Salt River (you could also row there yourself, which was less appealing and if so rendered you a dead pigeon — a possible relation of the better known lame duck). If you gained enough plumpers (by no matter what scallawaggery) and all worked out you won heavily, known as blousing or sharing lashes.

And if all else failed: you could abstain from beans.