Welcome to the thirteenth and latest update of the online version of Green’s Dictionary of Slang.

As ever, some statistics: research over the last three months has added 339 new slang terms; 200 entries have been predated as to their currently recorded ‘first use’ and some 3388 new citations – including ante-dates, inter-dates and post-dates to reflect the continuing use of many terms –  have been uploaded within  2303 terms. In total the database currently offers 55,387 headwords (within which are nested over 135,000 discrete words and phrases, underpinned by over 655,000 citations). All this material is on offer to every user.

For an overview, with the fruits of the last quarter’s research in chronological order, all users of the dictionary can go here.This uses the same software as the Timelines of Slang. New terms are marked in red, ante-dates in blue. As pioneered in recent updates, the format has been improved: entries now link to the specific part of a database headword, its sense and where pertinent its homonym number. Unfortunately the software does not permit click-through access (this is in development) , but users will be able to see at once which part of an entry has improved.

The usual variety of authors and sources have been eviscerated for this update. Between them they cover a representative selection of slang’s eternal interests. Among them are certain stand-out providers: 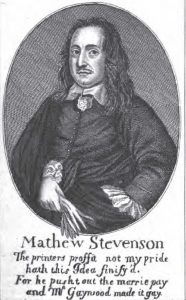 Stevenson (1654-85) appears to have had a short life and a merry one. Born in Norwich he gravitated to London where he was a minor figure amongst the wits and rakes who were to be found at the Court of King Charles II. The Wits Paraphras’d was the second reprint of an earlier, seemingly more parochial collection of poems and balls entitled Norfolk Drollery (1673). This in turn was one of many such ‘drolleries’, e.g. Choyce Drollery (1661), Westminster Drollery (1671), Windsor Drollery (1672), Holborn Drollery (1673), Covent Garden Drollery and Merry Drollery (1691). Their subtitles sum up their contents, for instance Windsor Drollery offers ‘a More Exact Collection of the Newest Songs, Poems, and Catches, Now in Use, Both in City and Country, Then Any Yet Extant’. As perhaps it was, at least until the next in line. It was a long-lasting format: by the time Thomas D’Urfey produced Wit and Mirth, Or, Pills to Purge Melancholy: Being a Collection of the best Merry BALLADS and SONGS, Old and New in 1720, the hyper-drollery as it were, the contents ran to six volumes.

Stevenson’s contribution to slang include brush someone’s jacket (to beat up), cunabling (copulation), cupboard, warren and piggin and puddle (all the vagina, the last presumably when in a state of sexual excitement and exuding ‘letch-water’) , fox-sleep (a drunken sleep) and grub (to execute by decapitation). The most important is perhaps his 257-year predated use of piss into the wind, to make a futile effort 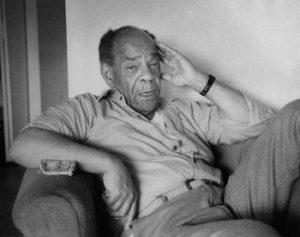 Robert Deane Pharr (1916-92), pictured towards the end of what had been a generally tough life, was as far from Stevenson as imaginable. An African American, he was born in Richmond Virginia, the son of Lucie Deane Pharr, a teacher, and John Benjamin Pharr, a minister. His career seemed to start well – winning a national play-writing contest while at Fisk University in Tennessee, but this was followed by three years in a sanitarium, being treated for tuberculosis and alcoholism. When he returned to the world, he began twenty years as a waiter in a variety of East Coast clubs, hotels and resorts. It was at the Columbia University Faculty Club that he gave his manuscript, for the book that would become his one real seller  —  The Book of Numbers  — to one of the publishers who ate there. The publisher was impressed, the book was published to some acclaim. The neophyte author was already 53.

S.R.O. standing for ‘single room occupancy’ appeared in 1971. If The Book of Numbers (the ‘numbers in question being the small-scale but widely played gambling game also known as ‘policy’) had been set in the past, the 1930s, this was a far more autobiographical work, set in a down-market hotel in Harlem, with its cast composed of junkies, pimps, dealers and a variety of the lowlifes who lived there.  Like the real-life Pharr (‘Sid Bailey’ in the book) the narrator worked as a waiter, drank to excess and attempted a writing career. The book, said one critic, turned out ‘profane, penetrating, but not wholly successful.’

S.R.O. had its moments but Pharr’s remaining works —  The Welfare Bitch (1973), The Soul Murder Case (1975) and Giveadamn Brown (1978)  —  went pretty much un-noticed. This didn’t deny them a healthy slang vocabulary. Pharr had seen himself as a black Sinclair Lewis (he of Babbitt, 1922) and like Lewis had no problems with using vernacular speech.

Among those terms he brings to the lexicon are back-rider (a nag), carry a stick (to use or share someone else’s accommodation but make no contribution to the rent), cat on (to leech on, to exploit), chaff-burner (a racehorse), gang job (group male to female sex), go for blows (to be wholly committed, to act seriously), house of D. (the women’s house of detention in Greenwich Avenue, New York City), drop one’s oyster (of a woman, to achieve orgasm), slobbery (socially worthless activities), titty-sucking (a general adjectival insult implying weakness) and top and bottom (the respectively ‘male’ and ‘female’ partners in a lesbian relationship, terms usually applied to sado-masochistic sex). 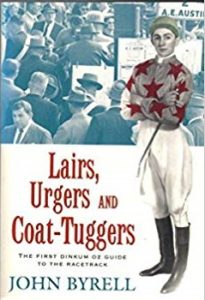 Australian sportswriter John Byrell’s ‘First Dinkum Oz Guide to the Racetrack’ appeared in 1996. It followed an ‘as told to’  memoir by the cricketer Jeff Thomson (Thommo Declares ‘the life and times of Australia’s most colourdful larrikin’ 1986) and Up the Cross (1983), a humorous take on Sydney’s once Bohemian King’s Cross area. As the racing book’s title makes clear, Byrell has plenty to offer for the slang collector and much of it hitherto un-noted. (All three terms refer to importuning racecourse touts). There are 111 examples of the first recorded uses of a term, and a mere foursome of improved predates. Among the former are numbered boggie (a country dweller), cattledog (to talk nonsense), flum (unsuccessful), mock-merchant (a clothing salesman), meringue (a weakling), hay pirate (a horse) and such ripe Australian phrases as not give a blurt (i.e. a fart), flat as a ballerina’s tits, a whole different bucket of bream, go like a crippled cat, fast as a scared possum, like sheilas at a frock sale (unrestrained), half a hair past a freckle (a minuscule period of time) and the pessimistic if they were raffling Sydney I’d win the Jap shithouse.