To celebrate the First Anniversary since the launch of Green’s Dictionary of Slang in October 2016 we offer a small competition.

The following text comes from a pamphlet The New Sprees of London, or, A guide to all the flash cribs of the metropolis detailed in a night’s spree of Harry Flashton and his cousin Giles : in this valuable work will be found general maxims for a night’s spree, … peep into the night houses from west to east, … description of the cadgers’ palace …, list of accommodation houses, … economical calculations of the expense of a night’s spree. Published in 1844 it was one of many such publications, a guide to ‘low life’ amusements in the capital. Harry and Giles tip their tiles to the pioneers of such exploits: Pierce Egan’s Tom and Jerry (and their pal Bob Logic). And like Egan’s best-seller, Life in London, the New Sprees was keen to demonstrate a through knowledge of current slang as proof of its authenticity. In this introduction the anonymous author addresses his readers directly: 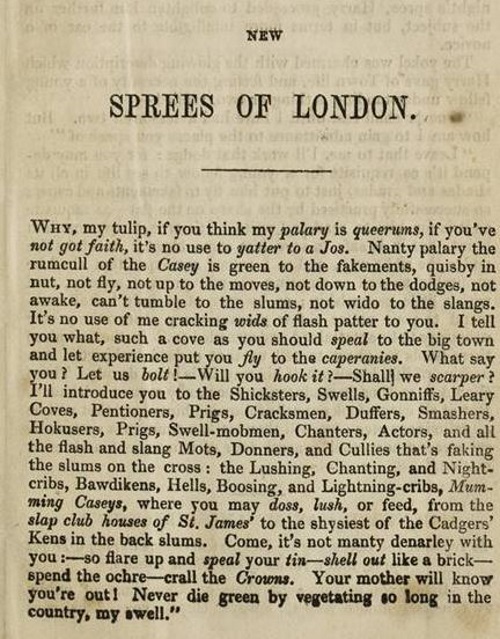 There are approximately 70 slang terms here (some italicised, some in roman). For the purposes of our competition, the challenge is to ‘translate’ them all into standard English and, if possible, thereby to rewrite the text ‘in English’. If a translation proves too much, then a simple list will pass muster.

All the terms should be available in the free version of GDoS. If any have escaped, then try a bit of educated guesswork – it’s what slang researchers have to do all the time. (The spelling is inevitably shaky: manty, line 18, for instance, is in fact nanty as in line 2).

The fullest translation (and failing that the best shot at a comprehensive list) to arrive by Monday 13 November will receive a one-year free subscription to the dictionary. Five runners-up get a GDoS tote bag. Mr Slang will of course be amenable to bungs, dropsy, freemans, palm oil, straighteners and any other of the 64 terms whereby slang synonymizes the bribe.

Please email your solutions to jg@greensdictofslang.com.

Go it, boots, and cushty bok!