Welcome to the fifth and latest update to the online version of Green’s Dictionary of Slang, the first to appear in what is now the second year of the  dictionary’s life as a website.

As ever, some statistics: research over the last three months has added 294 new slang terms, 376 entries have been predated as to their currently recorded ‘first use’ and nearly 3,300 citations – including ante-dates, inter-dates and post-dates to reflect the continuing use of many terms –  have been uploaded. The database currently offers 54,791 headwords (within which are nested over 133,000 discrete words and phrases, underpinned by a total of 630,000 citations). All of this new material can be seen by subscribers; the changes that are reflected by the predates  are also shown in alterations in the approximate dating used in the absence of citations: for instance ‘late 19C’ to ‘early 19C’, ‘1980s+’ back to ‘1940s+’, and so on. But as ever, for those who want or need to access the detailed heart of the data, we have to recommend a subscription.

For an overview, in chronological order, all users of the dictionary can go here. This uses the same software as the Timelines of Slang. As usual the research has focused largely on newspaper databases, notably that held by the British Library, the US Library of Congress and, for Australia, Trove. These, by their nature, tend to look backwards in time, but there is also an on-going accretion of up-to-date slang.

New terms are marked in red, ante-dates in blue. The format has been improved: entries now link to the specific part of an entry, its sense and where pertinent its homonym number. Unfortunately the software does not permit click-through access (this is in development) , but users will be able to see which part of an entry has improved.

Given the lack of focus on a single area of slang over the past quarter, I offer in place of my usual disquisition, Hero of Slang 7 (slightly augmented from the original version as published on line by the Dabbler in 2011). In this case the star is the Reverend Edward Bradley, best-known by his literary pseudonym ‘Cuthbert Bede’. 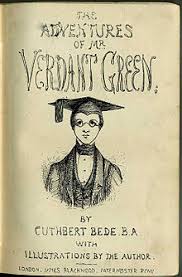 Once, browsing the net for myself, I found my name among those of alleged notability who had been born in Kidderminster. I appreciate that Kiddey, as Worcestershire locals term it, is probably under-endowed celeb-wise but this seemed a step too far. Anyway, we never even lived there. We were down the road in Bewdley. There was a pre-Beeching station where in the signal-box the station-master would set off the fog alarm to my infantile delight. Kidderminster, I fear, has eluded memoir. The place claims Rowland Hill (penny post) and Peter Collins (F1 driver). The one local star was its post-war MP Gerald Nabarro, a self-styled ‘traditional’ Tory, a concept best defined as the stretching of far-right-wing prejudices to such an extent that one becomes what Britain defensively terms ‘a character’.

However, and I’ve checked this out, no compiler of Kidderminster’s favourite sons has yet included on their lists the one that really counts: the Reverend Edward Bradley, born there in 1827.

Edward Bradley was for me a great writer. Which, running along my single critical track, tends to mean heavy on the slang. Hero? I’m not so sure. I don’t do heroes (except perhaps Lenny Bruce). He seems to have been a classical Victorian parson, making his way around a series of delightfully named livings such as Denton-with-Caldecote and Glatton-with-Holme, but in this he was one of very many. We know nothing of his sermons nor yet of his good works, but he was an apparently talented speaker who raised money for his churches through lecturing. He married an iron-master’s daughter so presumably there was more to live on than his annual stipend of £300. But where Bradley transcended his clerical peers was in 1853 when, writing as ‘Cuthbert Bede’ he produced The Adventures of Mr Verdant Green, an Oxford Freshman. The pseudonym was a tribute to the two tutelary saints of Durham  where he had attended the still fledgling university; he gained a 5th, which was two better than a 7th, then the bottom-most degree. Kidderminster and ‘Green’. And for that matter Oxford. This latter establishment may not delight everyone, but from my point of view, what, as they say, was not to love.

Verdant Green’s ‘career’ fell into three parts. The original Adventures (1853),  The Further Adventures (1854) and Mr Verdant Green, Married and Done For (1857). For a very light-hearted journey through a world that was nothing if not rarified for most of his readers (though ‘Bede’ had studied there for a year and had obviously boned up on university life to great effect) the books became hugely popular. Issued in a single volume the three episodes had sold 100,000 copies by 1870 and doubled that when offered in a cheap format. This was success on an almost Dickensian scale even if the book was a one-hit wonder: a sequel, Little Mr Bouncer, followed in 1878 but that flopped. ‘Bede’ took Mr Bouncer out of Oxford for half the book. Maybe it was a mistake.

And there are the illustrations. ‘Bede’ was his own artist and from the frontispiece of Verdant Green himself, they serve to crank up the humour. John Betjeman would use them for his own Oxford University Chest (1938) and they are as vital to the book as Tenniel’s are for Alice.  It would also appear that like Robert Seymour’s original illustrations for what became Dickens’ Pickwick Papers, the visual predated the written, although unlike the unfortunate Seymour who would kill himself and be replaced by Hablot K. Browne, working as ‘Phiz’, Bede controlled both image and, in time text. The illustrations, originally published in the Illustrated London News, may be seen as what would be one of the first ever attempts by a news medium to offer a ‘comic strip’. There were only two installments, one in December 1851, and one in January 1852. 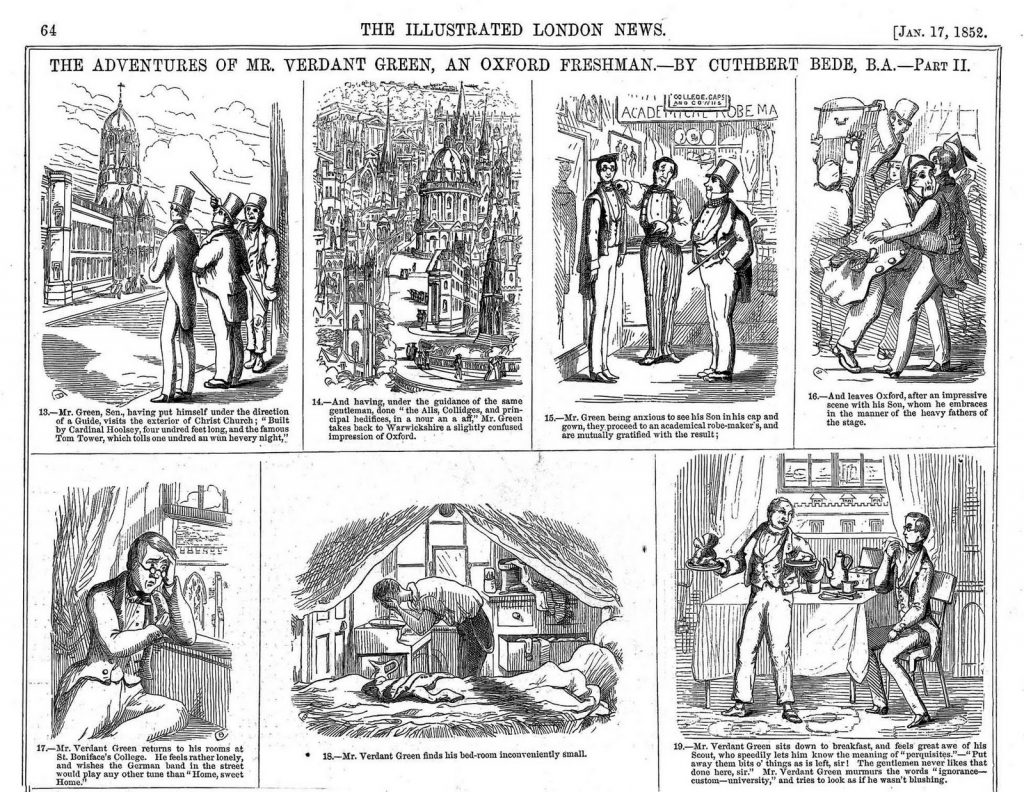 Writing in Notes & Queries for 6 November 1880, Bradley recalled the ILN’s illustrated supplements.  He listed a number of the ‘the Punch men’ who had contributed their work, and added that ‘In addition to some stories and other papers, I also contributed to these supplements a series of sketches, “The Adventures of Mr. Verdant Green, an Oxford Freshman,” which were drawn and engraved to appear, a page at a time, in Punch; but as one page of the Illustrated London News was equal to two of Punch, Mark Lemon [both ILN editor and Punch stalwart] asked me to transfer the sketches to his supplements in the former paper. When three sheets of the sketches had appeared the late Mr. Ingram  [the ILN founder] changed his mind concerning these special supplements and brought them to a sudden close. This led to the “Verdant Green” woodcuts being subsequently “written up to,” and issued with letter-press in a book form. Therefore it might be said of it that it was a book written in spite of itself.’

It’s a very long way from Brideshead, or Zuleika Dobson or Sinister Street, more literary (and one has to admit better written) ‘Oxford novels’, but Bradley seems to have launched the genre. His was a very different Oxford to that which immediately followed: the ‘hearty’-dominated result of the public schools’ obsession with sport, ‘manliness’ and patriotism. It was still tied to the raffish world of Pierce Egan’s ‘Tom and Jerry’, with plenty of racing, ratting, smoking of weeds, annual Town vs Gown set-tos (with help from The Putney Pet, a London prizefighter topped for the night in a mortarboard but no gown: it hampered his fistic skills), a procession  of unpaid tradesmen brandishing their ‘little bills’, and a conspicuous lack of work. Chapel is mandatory but there is no religion. Like a Restoration play names denote personality: the ultra-innocent Green aside, we encounter the ever-cheerful Messrs Larkyns (larking) and Bouncer (bouncer), Four-in-Hand Fosbroke, a great hand at tooling the tits, the rascally scout Robert Filcher (filch), and the downright wicked ‘tuft’ (i.e. aristocrat) Blucher Boots. Drink – much ale, wine and spirits, plus shandy-gaff, sherry-cobbler, egg-flip and  (wine and water topped with a roast orange, supposedly much loved by the episcopacy) – is seriously taken, generally starting at breakfast. Verdant is variously pleasant, screwed, rum, warm and down among the dead men (a nod to his unconscious state and a garland of empty bottles). He is also sappy, no doubt in every sense. The morning after one opts for sober-water. And starts again. 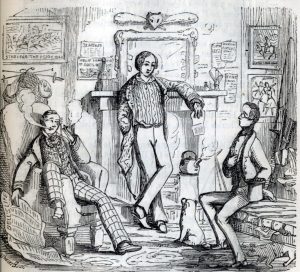 ‘Bede’ was good on contemporary Oxford lifestyle and language: posting aegers when you’re sick, giving wines for your friends, eluding the bulldogs, not to mention keeping your own bull terriers. Seeking local colour, he offers one of the best glossaries of the era’s campus slang. Verdant lives up to his name, a dogged Candide, sailing blithely through generally affectionate mockery, relatively painless hoaxes, and his own attempts at every diversion from rowing to cricket and archery to boxing – with never a successful outing at any. There are no women at Brazenface, his college, other than aged, stereotypically comic bedmakers, but they are available elsewhere: somewhat surprisingly Giglamps, as the bespectacled Green is predictably known to his pals, spoons a French milliner and other hunts after local deer are suggested. It perhaps helped that tin seems not to have been a problem. The contemporary novelist William Thackeray’s fictional bankers, Stump and Rowdy, i.e. ‘money and money’, seem to have had a branch in Oxford.

‘Bede’s’ readers cannot all have been Oxonians. Were any of them? Like Frank Richards (and even J.K. Rowling) he seems to have gained popularity by introducing the mass market to a fantasy of the elite. It is not ‘real’ Oxford (no more than Waugh’s Twenties Arcadia, though one might see Verdant as a precursor of Decline and Fall’s Paul Pennyfeather) but it charmed and definitely amused.

Bradley resumed his own name for other writing. Aside from novels (no more hits), children’s books and various travel pieces, he wrote for magazines, including a weekly double-acrostic column for the ILN and many paragraphs for Notes and Queries. He designed one of the first ever Christmas cards. He died in 1889 at his last vicarage, Lenton-with-Hanby, another picturesque name, in Lincolshire. In 1953 my parents left the West Midlands and moved east. To Lincoln. It figures.