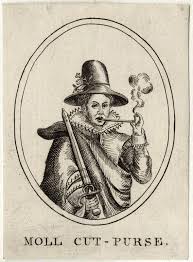 It is time for another of slang’s heroes. Or rather, heroines: this week Mary Frith, who bestrode both criminal London and the stage as her alter ego: ‘Moll Cutpurse.’

Frith was born near Ludgate in the City of London around 1584. For one who would go on to become a real-life ‘queen of crime’ her first recorded appearance was fittingly in a court record, accused of stealing a purse. No verdict is recorded, but there were further court appearances, again for thefts, at all of which she managed to obtain a verdict of ‘not guilty’.  In 1612, however, her luck seems to have run out. It is not certain when her nickname arrived, but it was certainly in place by that year when, writing to his friend Sir Dudley Carleton on 12 February, John Chamberlain told him how:

‘Mall Cut-purse a notorious bagage (that used to go in mans apparell and challenged the feild of divers gallants) was brought to [Paul’s Cross], where she wept bitterly and seemed very penitent, but yt is since doubted she was maudelin druncke, beeing discovered to have tipled of three quarts of sacke before she came to her penaunce.’ The punishment was for wearing ‘indecent dress: which as Chamberlain  makes clear, referred to Frith’s frequent sporting of male clothing.

By then she was indeed notorious. In a male-dominated hierarchical society she had come to epitomize much that that world feared and thus condemned. Her cross-dressing in ‘mans apparell’ was seen as undermining the established separation of genders, her frequenting of tobacco houses – the first woman recorded as so doing – and her later boast that it was a lifetime’s consumption of the weed that had ensured her longevity, was similarly subversive: women should not smoke. In these contexts, modern studies of her life have claimed her as a proto-feminist. In addition there was her image as a 17th century ‘Moriarty’, that fictional ‘Napoleon of crime,’ controlling every aspect of contemporary villainy. In her role as both receiver and broker of stolen goods she resembled her 18th century successor Jonathan Wild, who would finally be hanged for playing both ends of law-breaking against his own greedy middle.  Thus the modern historian John McMullen:

‘She acquired some control over the organization of thieving… and established a warehouse to handle stolen property. Her subordinates were paid higher rates and worked mainly for her; she in turn returned the stolen goods to their owners. Her influence as a receiver and thief-taker was institutionalized. Her informers and accomplices advised her about robbers and pickpockets, and advertised her reputation. She cultivated specific crimes, instigating a lucrative trade in stealing and returning shopbooks and account ledgers that had specific value only to business owners. She established a market in high-value items such as personal jewels, rings, and watches. Her influence in the underworld stemmed from her power as defender of the public interest…she provided shape and discipline to thieving gangs and she expanded the frontiers of theft.’

Inevitably Frith became a symbol, and was as such celebrated and/or vilified in the contemporary media. In 1610 the writer John Day composed, but it would appear did not publish a pamphlet entitled The Madde Pranckes of Mery Mall of the Banckside with her Walkes in Mans Apparrell and to what Purpose. Four years Thomas Freeman wrote that:

‘They say Mol’s honest, and it may bee so,

But yet it is a shrewd presumption no;

To touch but pitch, ’tis knowne it will defile,

Moll wears the breech, what may she be the while?

Sure shee that doth the shadow so much grace,

What will shee when the substance comes in place?

A few years later John Taylor, the Water-Poet (named for his day job: rowing Londoners across the river Thames), praised her as a contrast to those whose lives were dominated by ephemeral fads and fashions:

For she doth keepe one fashion constantly,

And therefore she deserves a Matrons praise,

In these inconstant Moone-like changing dayes.

Frith’s finest hour came not in print, but on stage: Middleton and Dekker’s play The Roaring Girle, or Moll Cutpurse, first performed in 1611. There was no pretence about the heroine’s identity and Frith, perhaps egged on by the playwrights for purposes of publicity, even appeared on stage at the Fortune Playhouse. She was dressed as a man and closed the evening’s performance with a jig. Critics have argued over the play: some see it as an early demonstration of feminism in action; others, given the final scenes in which ‘Moll’ is re-absorbed into law-abiding society, as a sell-out, a means of ensuring that the audience left the theatre in the comforting knowledge that all was right in the larger worlds and the underworld was no more real, let alone threatening, than a stage performance. More important for our purposes is Moll’s cheerful revelation of the supposedly secret language of the underworld, its cant.

In the first scene of Act V the Roaring Girl meets a fellow low-lifer, one Tearcat, and as her guests, a gaggle of aristocrats, look on, puts him through an interrogation:

Moll: And Tearcat, what are you? a wild rogue, an angler or a ruffler…?

Tearcat: Brother to this upright man, flesh and blood, ruffling Tearcat  is my name and a ruffler is my style, my profession.

Trapdoor: I have, by the salomon, a doxy that carries a kinchin mort in her slate at her back, besides my dell and my dainty wild dell, with all whom I’ll tumble this next darkmans in the strommel, and drink ben bouse, and eat a fat gruntling cheat, a cackling cheat and a quacking cheat… 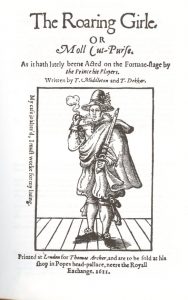 All good stuff no doubt – no less than nineteen  discrete cant terms in this brief example and the whole scene carries on in the same way – but it reads less like a feasible dialogue and more like a cursorily dramatized slang glossary, bereft only of alphabetical order and explanatory definitions. In parts it echoes Harman’s canting dialogues, throwing in as many strange terms as possible into a supposedly spontaneous dialogue. Nonetheless Middleton and Dekker, who had already issued his cant-based pamphlets, were making cant available to yet another audience. The on-stage aristocrats are initially appalled by the language: ‘The grating of ten new cart-wheeles,’ complains one, ‘and the gruntling of five hundred hogs comming [sic] from Rumford market, cannot make a worse noyse then this canting language does in my eares’, but distaste leads to fascination. It is likely that the off-stage audience were similarly fascinated and equally keen to learn. The play contains some 117 terms, many of them in this contrived scene. Dekker, ever-fascinated by the underworld scene, drew on what he knew: nearly three-quarters of the words can be found in his canting pamphlets The Bellman of London or in Lanthorne and Candlelight. Several more are pre-dated by his play, The Second Part of the Honest Whore (1609). There are eleven first uses, none of them cant. To make ducks and drakes, to make a mess; fadoodling, used to mean sexual intercourse and offered as euphemistic explanation of wapping and niggling, both of which are spoken but not further explained, fleshfly, a whore, a heap, a good deal, e.g. of money;  hog-rubber, a peasant;  muzzle-chops, one who has a prominent mouth and nose; a nipping Christian, a cutpurse; puggard (from SE pug, to pull or tug), a thief; tearcat, a thug; and whisking, brisk or smart. Finally the play is the first to use moll to mean a woman, usually with overtones of promiscuity. Moll, of course, has lived on, notably in the compound gangster’s moll. The term was especially popular in the mid-19th century when it was reclaimed by cant, stripped of any sexual overtones and used in such compounds as moll-tooler, moll wire or moll whiz, a female pickpocket, square moll, an honest woman and moll-buzzer, a street thief specialising in purse-snatching.

The Roaring Girle, was not Frith’s only on-stage representation. Later in 1611 Nathan Field staged his play Amends for Ladies. It was, as the title suggests, a response to the Middleton/Dekker play, and Moll appears in a much less kindly light. Nor does she play a central role, offering merely a cameo which may be seen as Field’s attempt to profit from The Roaring Girl’s success. Compared with the leading female roles, the Widow, the Wife and the Maid, and the story of their relations with their lovers, Moll’s subversive, transgressive personality, its parading of the sins of thieving and lust, has been clearly introduced only for vilification. Such subversive attitudes must be punished and Moll is duly pilloried as an emblem of everything seen as wrong with the over-independent female.

In 1614 Frith married one Lewknor Markham, probably son of the author Gervase Markham (apostrophised as ‘the earliest English hackney writer’). As one might expect, she kept her maiden name and the marriage did not last. She established a fencing school, but this was probably a front and perhaps ‘fencing’ (the underworld use of word was first recorded in her lifetime) was a pun. In 1624 she was summoned before the Star Chamber: her crime an unpaid bill, but the evidence focussed on her subversiveness.  In 1644 she was listed among those recently discharged from Bethlem Hospital, better known as ‘Bedlam’; it appeared that at least for a while she had been considered mad. She died on July 26 1659.

A biography appeared three years later. As the ODNB notes, it managed to muddle virtually every known fact. But by then the facts were academic. Moll Cutpurse, the embodiment of so many transgressions, had been taken up for moralising and myth.